On The Second Day of Pre-Release...the author gave to me...The Perfect Proposition! Maybe... 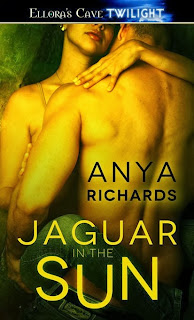 How would you approach a man you find exceedingly attractive, intelligent and downright sexy, especially if your sole purpose was to get him into bed? Would you take the stealth approach, making your way with studied nonchalance around the room until you’re within range, strike up innocuous conversation and then reel him in with your wit, charm and the come-hither look in your eyes? Or would you hit the dance floor and put on a show, telling him with sultry glances it’s all for him?

The heroine in my upcoming release, Jaguar in the Sun, book four in the Unveiled Seductions series, available December 4, 2013, doesn’t have time for all that. She’s on a strict timetable, and knows it’s now or never if she wants to get a taste of Xbal Montegro, not to mention experience his atraspa, a special type of sex magic that takes centuries to master.

Since she’d been distracted when she left the temple, she’d forgotten to throw up a shield and the drizzle had turned her previously sleek hair into a mass of waves but she didn’t care. It wasn’t a big deal, just a small detail and one she didn’t think would really matter. In her experience a man didn’t care that much about how a woman’s hair looked when she was propositioning him.

And she’s decided on the direct approach… very direct. At his office, this is the beginning of her proposition:

Cassie folded her hands on her lap and crossed her legs, not bothering to adjust the edges of her skirt when they fell open to mid-thigh. Xbal’s gaze remained on her face. A little disappointing but not surprising. This was a man who didn’t ogle or stare, was as cool as the proverbial cucumber.

“Another of your brainwaves for a concert at the Midnight Café, needing to be put together at a moment’s notice?”

Amusement added another layer of richness to his voice and Cassie shifted, glancing down at her hands in case the heat of rising desire showed in her eyes.

“You could say that, I guess, although I will tell you I’ve put a great deal of thought into this idea.” She couldn’t help the answering laughter in her tone, knowing what she was about to say. Looking at him through half-lowered lids, wanting to see his reaction, she said, “I actually came by to see if you’d be interested in having sex with me today.”

Wow. Not sure I’d be able to be so bold, but there’s a really good reason why she doesn’t have time to shilly-shally. And I guess you’re wondering how she follows that up, and whether Xbal takes her up on the offer or not. Let’s just say his reaction isn’t quite what she’s expecting, but that’s not necessarily a bad thing!

What would your perfect proposition be? I’d love to hear, so tell me in the comments!

Tomorrow I’ll be at the Darker Temptations blog, giving you a little peek more of Jaguar in the Sun, including the official excerpt, which will give you an idea of Xbal’s reaction to Cassie’s proposition and where it leads. And for the next ten days I’ll be here, there and everywhere on my Twelve Days of Pre-Release. Watch out for me, and say hi!

Jaguar In The Sun Blurb:

Jaguar in the Sun
Anya Richards

Posted by Anya Richards at 4:30 AM

Ever wanted to be known as a Hottie? Like promoting authors and chatting with friends about your favorite books? Well, you can do both and earn goodies.

We're looking for dedicated people willing to talk us up to friends, on Facebook, and Twitter about us.

If you're interesting in becoming a member of the Cabal Hotties email us HERE.


Ode to the Cabal- by Bootay Hotness

“The time has come,” the Cabal said,
“To talk of many things:
Of spanx--and subs--and multi-cocks
Of neuroses--and flings
And why the virgin gave it up
For a penthouse and some bling.”

“There is much more,” they opined,
“Straight out of the gate:
Weres--and hymens--sausages
Alphas we debate.
Does bigger always win the prize?
And really, can fate mate?”

“But wait a bit,” the editor cried,
Trying hard to frown;
“Let me wipe my tears away,
Did you write all that shit down?”
And that’s the tale, so I’ve heard,
Of how F&G was born.